“I wish I could give you better news, but I think you know the truth. And that is that we are now some 300 delegates behind Vice President Biden, and the path toward victory is virtually impossible,” Sanders told supporters in livestreamed remarks, shortly after he had broken the news to campaign staff.

Sanders’ decision comes weeks after the coronavirus pandemic upended the Democratic race. The worsening outbreak delayed primary contests and the party’s nominating convention and halted all in-person campaigning, forcing the two candidates to hold virtual events from their respective homes. 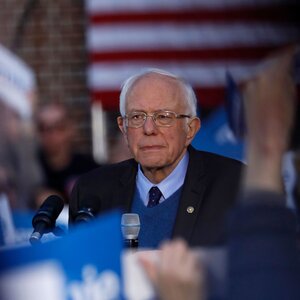 Sanders suspended his campaign after mask-wearing voters went to the polls Tuesday in Wisconsin. The state controversially forged ahead with its primary, despite public health concerns. Results for the state’s contest are expected on Monday.

It was the first state to hold a contest since March 17. Biden swept three primaries that day, capping a month in which he rose from what seemed like the political dead to dominate three straight weeks of multiple-state primaries. Biden won 10 contests on Super Tuesday, five a week later and three more in mid-March, before the virus delayed more than a dozen contests.

Sanders, like every other Democratic presidential candidate, had long promised to support the eventual nominee. In his remarks Wednesday he congratulated Biden, calling him a “very decent man,” and promised to “work with [Biden] to move our progressive ideas forward.” Biden lauded Sanders in a lengthy statement of his own.

Still, Sanders said he’ll remain on the ballot in the rest of this year’s primaries, in order to win more delegates to bring to the Democratic National Convention. The more pledged delegates Sanders has, the more he’ll be able to influence the party’s platform and rules.

Not long ago, it was Sanders, not Biden, who seemed poised to win the Democratic presidential nomination. Sanders finished atop the muddled Iowa caucuses in a virtual tie, narrowly won New Hampshire, and took the Nevada caucuses in a landslide.

But Sanders, an independent who caucuses with the Democrats, was never able to win broad support beyond his base of core supporters. And when the Democratic field suddenly narrowed after Biden’s blowout victory in South Carolina, Biden consolidated most of the voters that had previously split their loyalties among former South Bend, Ind., Mayor Pete Buttigieg, Minnesota Sen. Amy Klobuchar and others.

Suddenly, Sanders wasn’t just knocked out of the front-runner position; he was underperforming his 2016 presidential bid. Biden beat him in several states Sanders carried four years ago, and Biden carried every county in Michigan, the site of Sanders’ most surprising 2016 victory over eventual nominee Hillary Clinton. And his vote shares were consistently lower, even when it was effectively a two-candidate race.

Sanders conceded he was “losing the debate over electability” after that string of losses to Biden but vowed to press on, arguing he was winning the party’s “ideological debate.”

Sanders repeated that argument Wednesday, saying “few would deny that over the course of the last five years, our movement has won the ideological struggle” for policies like a $15 minimum wage and universal health care.

“It was not long ago that people considered these ideas radical and fringe,” he said. “Today, they are mainstream ideas, and many of them being implemented in cities and states around the country.”

Indeed, despite two failed attempts for the Democratic nomination, Sanders has left a major mark on the party he never formally joined.

In 2016, his “Medicare for All” proposal was far outside the party’s mainstream. In 2020, several other presidential candidates had co-sponsored Sanders’ signature health care plan.

Even candidates like Biden, who opposed Medicare for All, framed their own platforms around Sanders’ proposals, promising a large government-run health insurance program as a central component of their plans.

Still, Sanders was never able to replicate the coalition of young, progressive and often disaffected voters he put together in 2016.

While Sanders is promising to campaign for Biden, it’s an open question whether his devoted, progressive base will enthusiastically back a moderate who Sanders criticized in recent months for past votes for international trade deals and the 2003 Iraq War.

Many people in Clinton’s camp blamed hostility from Sanders supporters as a reason why she lost the general election to President Trump in 2016 — though that hostility was exacerbated by hacked and leaked Democratic National Committee emails showing that many party officials had a clear preference for Clinton over Sanders that year.

On Wednesday, Sanders directly addressed supporters who wanted to see him stay in the race: “I understand that,” Sanders said, but countered, “I cannot in good conscience continue to mount a campaign that cannot win and which would interfere with the important work required of all of us in this difficult hour.”

Biden himself released a lengthy statement Wednesday, saying that “Bernie has put his heart and soul into not only running for President, but for the causes and issues he has been dedicated to his whole life.”

He added that “Sanders and his supporters have changed the dialogue in America.”

What Do Countries With The Best Coronavirus Responses Have In Common? Women Leaders

House set to deliver impeachment article to Senate, begin 2nd trial for former President Donald Trump [upi.com]
Budweiser joins Coke, Pepsi brands in sitting out Super Bowl [abcnews.com]
Coronavirus updates: 2 in 5 Americans live where hospitals are at capacity; Japan scrambling for 'herd immunity' ahead of Olympics [usatoday.com]
Your kid might not return to a classroom this year. Are teachers unions to blame? [usatoday.com]