Kayleigh McEnany, his campaign spokeswoman, replaces Stephanie Grisham, who had the job for nine months, and will return to Melania Trump’s staff. 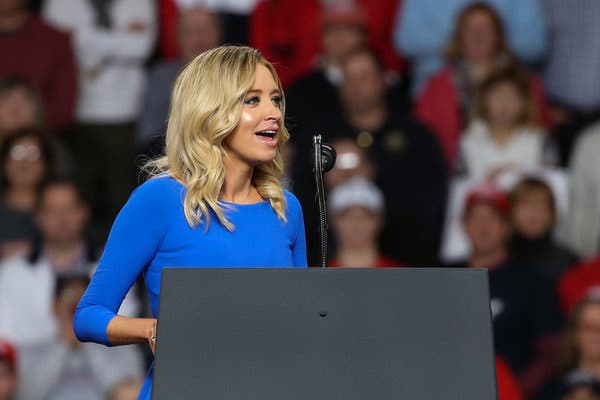 WASHINGTON — In President Trump’s early days in the White House, Kayleigh McEnany made a name for herself by defending him on CNN, a network where he has few allies. As a Trump campaign aide, she became a fixture at his political rallies. And on Tuesday, she was named White House press secretary, capping a journey toward the center of the president’s orbit.

But Ms. McEnany, 31, is not expected to significantly change her role in her new job, whose main responsibility — answering questions from press in the briefing room and communicating the president’s decisions to the public — has been long been subsumed by Mr. Trump himself. She is expected to keep defending him on television.

Her appointment, by Mr. Trump’s new chief of staff, former Representative Mark Meadows of North Carolina, is the latest shake-up in a communications office that has seen almost constant turnover since 2017. Ms. McEnany will replace Stephanie Grisham, a Trump loyalist who was named press secretary last summer and will return to the East Wing as chief of staff for Melania Trump, the first lady. The move was first reported by CNN.

Ms. Grisham did not hold a press briefing during her time on the job, and Ms. McEnany is not expected to — at least in the short term. Privately, few aides see the point: As Mr. Trump remade the presidency in his own image, approaching the job and making hiring decisions much as a reality television show producer would, the role of White House press secretary stopped resembling the job of administrations past.

Long gone is the idea that a single aide would be designated to spend half the day collecting information and talking points to explain the president’s decision making to the American public. The coronavirus crisis has confirmed that Mr. Trump is happy to spend hours a day doing the job himself.

The president has grown to see the daily briefings he attends with members of his coronavirus task force much in the way he does his Twitter account: as an unfiltered bullhorn to get his own version of reality across, and a way to wage battles with journalists who have questioned his accounting of the facts.

Ms. McEnany and the Trump campaign declined requests to comment on her new job or when she would start.

Ms. McEnany is skilled at furthering the president’s message on cable television. By the time she graduated from Harvard Law School in 2017, she was a regular contributor on CNN.